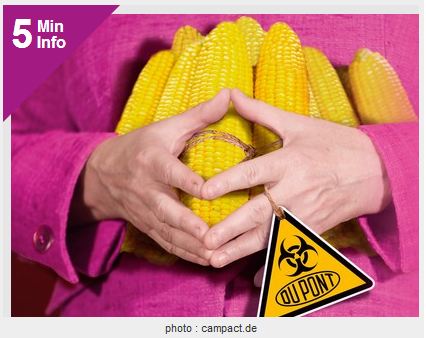 As German coalition partners discuss the future of GMO agriculture, in just over 24 hours more than 100,000 German citizens have already made their opinion clear, signing a petition stating that they do not want GMO crops on German fields.

The petition is in response to a disagreement between the prospective German Grand Coalition parties. While the SPD (Social Democratic Party of Germany) and CSU (Christian Social Union) dissaprove of allowing the cultivation of genetically modified plants, the CDU (Christian Democratic Union) does not want to make such a commitment in the coalition agreement.

The disagreement is especially heated as on November 6th, the European Commission recommended the cultivation of genetically modified DuPont 1507 corn. This corn regularly produces poison that threatens butterflies and other insects and could be grown in Germany as early as in the spring.

ARC2020 joins Campact and a broad alliance of other organisations in urging Chancellor Angela Merkel to reject the release and cultivation of GM crops and to anchor this decision in the coalition agreement.

Find further information about the petition and how to get involved on ARC2020.eu.