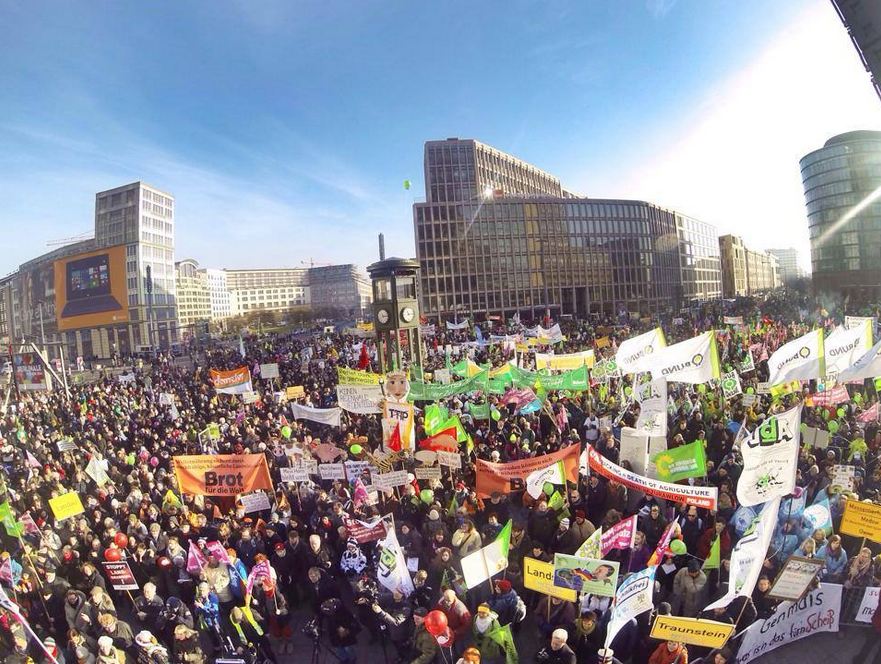 30,000 people from many backgrounds, ages and organisations met together in the Berlin winter sunshine to say, loudly and clearly, We Are Fed Up! The industrialised food system was the target of this colourful, carnival-style demo, which, while exhuberent, also aimed anger at what is happening to our food and our planet.

This video, by Francetv info, provides a peek into how it felt in the middle of the march. Seeds, TTIP, GM, factory farming, hunger, CAP reform and an array of issues around the industrialisation of agri-food were patricipants’ focus. Along with the 30,000 people, over 70 tractors were involved in the march, many festooned with banners, placards and other colourful material.

A great crew from Arc2020 took to the stage, including Pavlos Georgiadis who gave a rousing, riveting speech about the situation in his home country Greece as well as what’s happening with the industrialisation of agri-food more generally. Photos from the ARC2020 team on stage, looking out at the view in the photo to the left, here.

The annual ‘We Are Fed Up!’ (Wir haben es satt! in German) demonstrations are a lively, exciting way of bringing together tens of thousands of likeminded individuals. […]

Read more about the demonstration on the ARC2020.eu website.