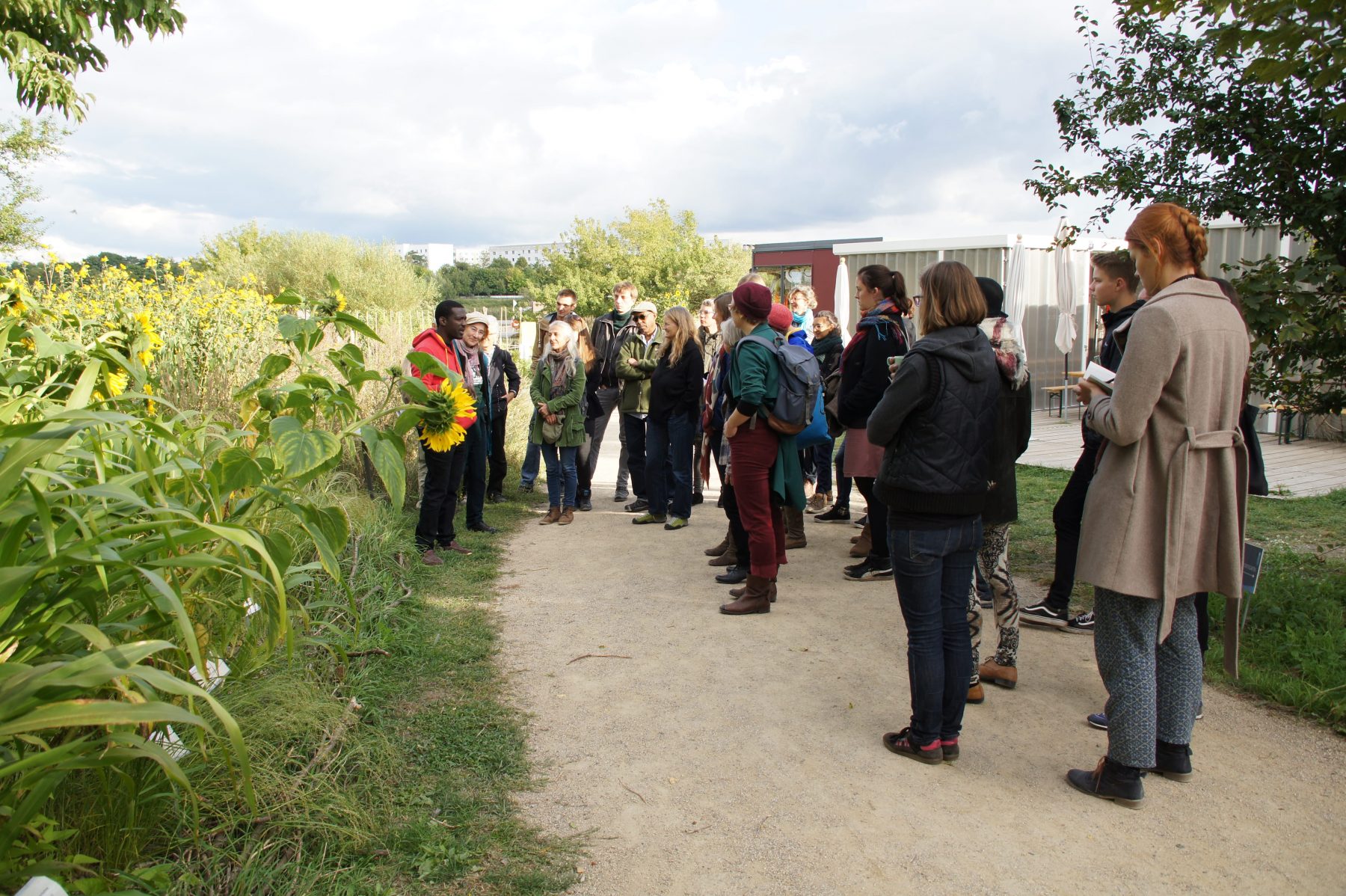 Viewing the Ethiopian Garden next to the Global Field (photo: Amélie Dupuy-Cailloux)

On Wednesday, 20 September we welcomed an amazing number of interested and curious visitors to our Field Talk on Ethiopia on our Global Field. The golden rays of the autumn sun really highlighted the beauty of the sunflowers in the Ethiopian Garden, and the entire group of visitors started off their viewing in the small Ethiopian Garden at the edge of the Global Field.

Asmelash Dagne, coordinator of the African project “10,000 Gardens” and consultant for ecological agriculture and permaculture was able to explain on location how a typical school garden in Ethiopia is organised. He first pointed out the fencing made up of intertwined sticks and grasses. It is designed to keep out large animals, he explained, which would trample the ground and eat the crops. At the same time, “useful” animals like snakes live in the fencing and eat the insects that would otherwise attack the plants.

The irrigation system with parallel ditches, which run along contour lines in order to collect as much rainwater as possible could be inspected, and of course the mixed cultivation of teft, sunflowers, beans and maize, which grow to different heights and thus populate different levels.

Elisabeth Meyer-Renschhausen added to the presentation by talking about the fundamentals of permaculture and about nutrition and cultivation in Ethiopia. The so-called three-level agriculture is practiced there. The top level often consists of Moringa trees, the leaves of which can be used as animal feed, and the roots of which can be used to purify water in less than an hour. It provides shade for the coffee plants that mostly form the second level. The lowest level is usually reserved for typical garden plants.

Asmelash Dagne pointed out that permaculture picks up on and integrates many features of the traditional indigenous farming in Ethiopia. As such, permaculture sees everything as one big circulatory system from which nothing should be taken on a long-term basis, just like the traditional Ethiopian agricultural method.

At harvest-time, for example, only the sheaves are cut off, while the stalks are left. In this way, water can collect and humus can form.

He very much enjoys teaching this “new” farming method to children and young people in school projects. One big problem is the growing disinterest among children and young people concerning farming, even in villages. But if nobody wants to work in the fields anymore, who will provide the country with food? Because of the massive promotion of conventional farming methods by the state and large agricultural businesses, traditional methods for things such as fighting pests are becoming increasingly lost.

This is where school gardens and education projects come into raise awareness and teach. The viewing then went on to watch videos of school classes in Ethiopia and in Germany with Daniel Diehl from Slow Food. While the children in Ethiopia wanted to know what German children eat on New Year’s Eve and were curious about why Germans eat so much meat and so often, the German children asked about the favorite food in Ethiopia and explained that meat is so cheap in Germany and that they ate meat because it tasted good and also out of habit. From their guided tour on the Global Field and the explanations provided at the buffet, the children already knew that the feed for German meat production often comes from other countries, which have to provide huge areas of farmland to cultivate soya, for example. Despite this, the young people defended their lifestyle, which brought about discussion among the visitors.

While we were eating – we had Injera, the typical Ethiopian flatbread dish with beans and vegetables – we talked about educating young people and raising their awareness in the North and South about nutrition and agricultural issues, about political responsibility concerning such matters, and about hopeful initiatives like Slow Food, the Terra Madre Network or Nyeleni. 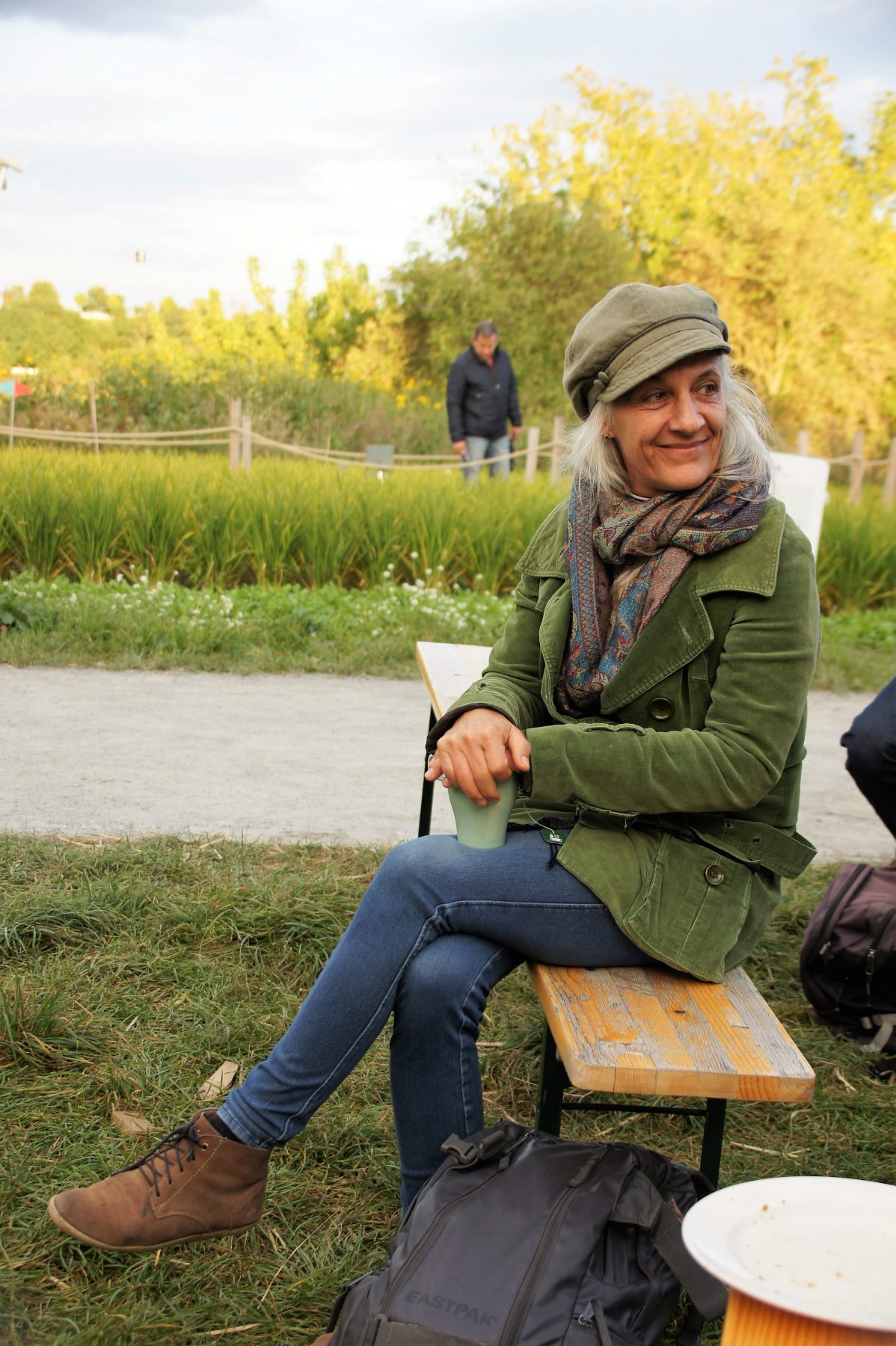