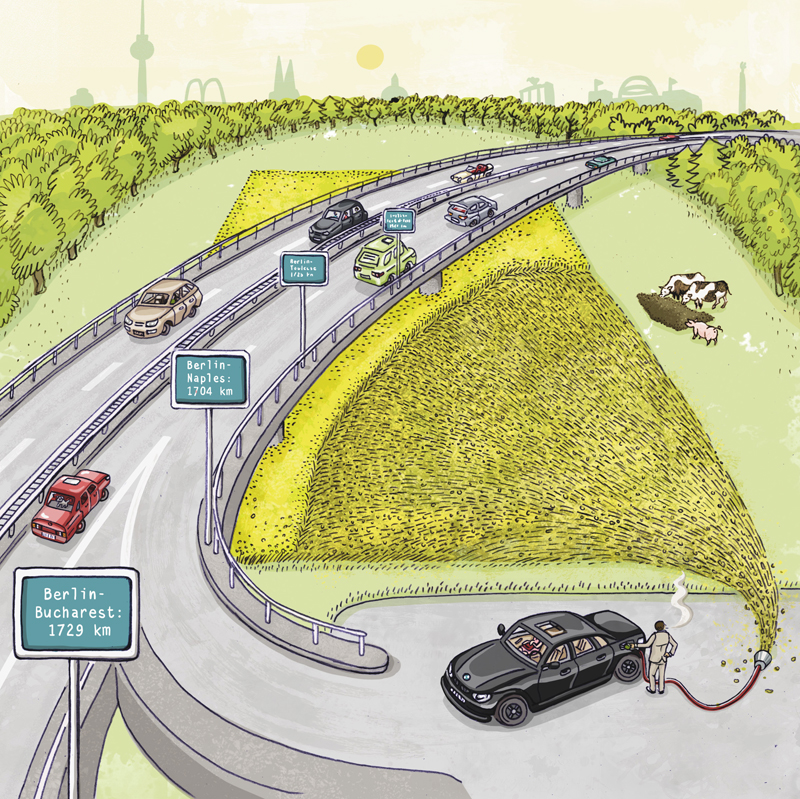 Is it really a good or “climate friendly” idea to burn the biomass from my 2000m² as fuel in cars or as energy for power generation? If the average EU rapeseed yield for 2000m² (600kg) was converted into biodiesel, how far would this take us in an ordinary car? Well, with a diesel engine consuming the EU car fleet average of 7.1 litres, you could travel a distance of around 3400 kilometres. Just one return trip between Berlin and Bucharest, or Berlin and Naples, would use up your entire 2000m² for the whole year; although it would still be possible to yield some animal feed from the by-product of the oil production process.
The European Union has adopted legislation that requires 10 percent of energy in the transport sector to come from so-called “renewable sources” by 2020. To this end, an increasing part of arable land from within and outside the EU is being used to fuel our cars. Producing fuel from land uses a lot of energy and causes greenhouse gas emissions. In addition, the arable land used for biofuels is often gained by destroying valuable ecosystems, such as rainforests. The climate benefits of such fuel and energy generation may therefore be rather small, or even negative, compared to conventional fuels.
In Germany, one fifth of all arable land is already used for fuel and energy production; fuel that would in fact not be needed if petrol consumption in Germany was reduced by just one litre per 100 kilometres!

Friends of the Earth Europe
– Website on agrofuels offering reports, news in in-depth information on how biofuels are putting growing pressure on land, food and forests

The EU Biofuel Policy and Palm Oil: Cutting subsidies or cutting rainforest? This study finds that the EU consumes 40% more palm oil (for food, fuel and cosmetics) compared to 6 years ago. Palm oil use stands at 20% of the biodiesel mix. IISD (2013).

Biofuelwatch works to raise awareness of the negative impacts of industrial biofuels and bioenergy on biodiversity, human rights, food sovereignty and climate change