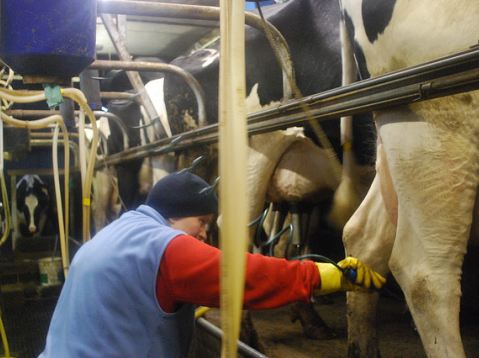 Unknown to many, about 30 million tonnes of GM animal feed is thought to be imported into Europe each year to feed pigs, poultry, dairy and beef cattle, as well as farmed fish. The UK imports an estimated 140,000 tonnes of GM soya and as much as 300,000 tonnes of GM maize annually for use as animal feed. Much of the soya and maize used is grown inSouth America, including Brazil, Argentina and Paraguay, where cultivation has been linked to serious environmental and human rights abuses.

Excerpt taken from an article by Andrew Wasley for The Ecologist.

Campaigners are so alarmed at the influx of GM animal feeds into the UK that they are now calling for a mandatory labelling scheme to force manufacturers and retailers to identify products made from livestock fed on a GM diet.

In the UK, foods containing GM material for human consumption are currently required by law to be labelled. However, human foods derived from GM fed animals – meat, fish, milk and dairy products – do not need to be labelled. This represents a worrying loophole which means consumers could inadvertently be eating be GM products.
Peter Melchett from the Soil Association told me that “labelling of all products from animals fed on GM should be legally required throughout the EU. Supermarkets in many European countries are now starting to label products from animals fed on GM.”

“It is a scandal that UK supermarkets refuse to give this information to their customers, and instead deliberately keep them in the dark, with, at best, information on their websites and confusing answers to people who call their helplines. “We know that people want accurate labelling, and at the moment supermarkets are betraying their customers on this issue.” The Soil Association cites a previous Food Standards Agency-published poll which found 67% of the public thought it was important for products made from animals fed GM diets to be labelled.

Europe – the UK is being left behind

In France, retail giant Carrefour in 2010 launched a labelling scheme to inform customers that animals used to produce foodstuffs have not been fed genetically-modified feed. More than 300 products now come with a ‘free from GM feed’ label after the supermarket said polls had found that more than 60% of customers would stop buying products if they knew they were made from animals given GM feed. Similar schemes are being adopted by other major European food retailers.

Find the entire article and more background information at theecologist.org